The first Convent School in Pukekohe was established by the Sisters of Our Lady of the Missions in 1885. St Joseph’s was opened on the 9th of  September 1923 by Bishop Cleary on it’s present site. The foundation stone had been laid the previous year by Reverend James Liston. The school started with 118 pupils including 10 Non– Catholic pupils and consisted of two large classrooms. 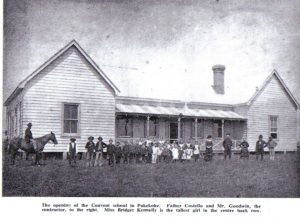 The roll increased and pupils came from a wide country area travelling by train and bus. Extra classes were accommodated at the old Convent. There was also  a secondary  school for girls there which became the Sacred Heart Juniorate for the Auckland area. In 1951 the wooden Infant Rooms were opened.

With growing numbers of children attending the school Teacher Aides began to help the Sisters. In 1957 the first P.T.A. was set up by Monsignor Kennedy. By the early 1960’s Full –Time Lay Teachers were teaching in the school. As the roll grew overflow classes were taught in the new Parish Hall beside St Patrick’s Church. In the early 1960’s the school complex was extended again including a new swimming pool. Much of the work was done through working bees by parents and parishioners.

In 1964 the Girl’s Secondary School at the Convent was closed. The old Convent buildings were demolished and much of the surrounding land was sold for housing. A new Convent was built and the Sisters took up residence in 1971. In 1988 the original 1923 brick building was demolished and replaced with two new classrooms– Rooms 3 and 4.

The first school Magazine was produced which has since become an Annual publication. By 1990 there were nine classrooms. In 1991 an Adventure Playground was completed. Shade trees were planted and cobblestone courtyards laid. A new caretaker’s shed was erected.

In 1992 the present Administration area and Library block were built. They were opened by Monsignor Lesley representing the Bishop of Auckland Bishop Dennis Brown. In 1993 part of the original school block of 1923 next to the new library was resurrected. The old basement wall became a beautiful feature wall.

Building projects continued and in 1994 a cloakbay was erected to link up three classrooms and the Reading Recovery / Resource Room. The school flagpole was erected. The first Major Production “Hey Bohemia”was held which has become a bi-annual event.

In 1995 the 11th classroom was built in the Junior area. The Board of Trustees commissioned a former student Jason Adams to do a carving depicting the ethos and Special Character of the school. This was blessed by Bishop Pat Dunn and a hangi was shared to celebrate the finished work.

The roll continued to grow and the school could no longer fit into the assembly hall underneath Room1 and 2 so alterations were carried out in 1997 to turn the stage area into storage space and the hall into a classroom giving a total of thirteen classrooms.

Fundraising through P.T.A. Gala Days enabled the Junior Playground to installed in 1998. Two shade-cloths were also erected.  One in the Junior area and later another in the Senior area in front of Rooms 3 and 4. In 1999 the St Joseph’s School Website was launched on the Internet and the School Hall Fund was established.

Two more classrooms were moved onto the grounds. One in Term 4  2003 and the other at the beginning of 2004. This brought the number of classrooms to fourteen and enabled an older classroom to be used as a Prayer Room.

In 2006 after nine years of fundraising we saw the construction and ultimate opening of our very own school hall.This was followed in 2007 by approval for an upgrade of the Administration block and Room 1 and 2. A temporary building was moved onsite at the end of the year for the office and the staffroom and library were set up in part of the hall. At the beginning of 2008 one classroom was housed in another part of the hall and the other in a prefab beside the hall on the bottom field.The building project was finally completed in the last term of 2008 and officially opened by Bishop Patrick Dunn on the 11th November. It included an ICT Suite ; upstairs a staffroom with a lift installed and downstairs a main office, Principal office, Assistant and Deputy Principal office, a Board Room and a lovely bright sickbay.

With a growing emphasis on technology in education all classrooms were installed with interactive whiteboards or mimios, data projectors and computers in 2009.

In 2010 the Sisters of Our Lady of the Missions celebrated 125 years since their arrival in Pukekohe and the school was involved in the celebrations. In Term3 of that year we opened our 16th classroom. This was built onsite and the project included a new cloakroom space for neighbouring classrooms. After much fundraising and the successful running of a school fair in 2012 Stages 1 and 2 of a new adventure playground were added to the old established playground.

In 2014 the staff and students moved to using Google Docs with the use of ipads , Chromebooks  and other digital devices throughout the school. In 2015 the Intermediate Team introduced a BYOD programme with Chromebooks.