Sisters of Our Lady of the Missions

Euphrasie Barbier was the foundress of the Sisters of Our Lady of the Missions.

Pukekohe was blessed to receive its first Sisters in 1885 and St Joseph’s Primary School was founded in 1923.

From 1923 until 1986 there were 22 principals each one being an RNDM Sister. The school was staffed almost entirely by RNDM Sisters who helped to build the strong Catholic faith that is part of Pukekohe in the 21st Century.

The Sisters’ emblem indicates the letters of their religious name as RNDM from the French name Religieueses de Notre Dame de Missions.

Rublev’s Trinity icon (Russian Othodox Monk, 1425)  reflects the RNDM charism of Contemplation Communion Mission.This is displayed in our school foyer and in the Sisters of Our Lady of the Missions’ convents.

Explanation of this icon

God Trinity is an eternal intertwining, everlasting flow and never-ending exchange of life and love and who opens Self to all of Creation, to all of humanity. It is possibly inspired by the visit of the three angels to Abraham cf Gen 18. The early church saw this as a prophetic announcement of the doctrine of the Trinity.

The Trinity is the root or source of all missionary activity and the icon depicts this, the Communion, Contemplation and Mission of the three persons in one God.

Left figure is the Father (the house is to do with the Father), centre, the Son (the tree), right the Spirit (water, Spirit’s symbol). Each person has a staff, symbol of Divine power. They communicate by a look which forms a circle, a movement of community and relationship. The cup is the cup of the Passover. The colours: blue – diviity, green – life.

How do  RNDMs “honour the Divine Missions” in their vocation?

Euphrasie gave  a clear answer: “by a profound and loving adoration, a complete fidelity and a generous devotedness”. (RNDM. MS. Const. Prelimary Chapter)

Hence for the Sisters of Our Lady of the Missions life is first of all a loving contemplation of their God. In contemplating God Trinity, the God of Love and Communion they understand what love is and share in the divine work of Love as Mary did, with fidelity and without counting the cost! It is according to an individual’s capacity to receive within themselves the outpouring of love flowing from the Trinity that they in turn can become “instruments of the Divine Missions”. More important than the works they undertake, mission is essentially the witness of a person who lives in God.

The two patronal feasts of the Congregation highlight the Sisters’ spirituality. These feasts are Pentecost and the Visitation.

Sisters of Our Lady of the Missions in Pukekohe.

We were privileged to have the RNDM Sisters living nearby who used to visit the school regularly.  After 132 years of service in Pukekohe, our mission sisters sadly left the convent and community in 2017. 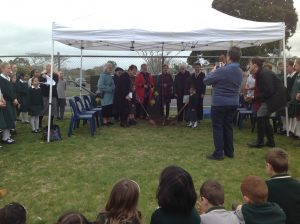 The special tree-planting ceremony to mark the 150th year of the RNDM Sisters arrival in New Zealand. 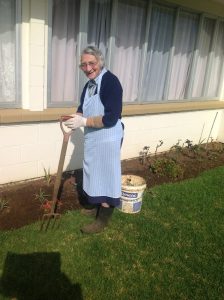 Sister Mary-John in her garden. What a wonderful example she was to us all!